EventStorming is a workshop format invented by Alberto Brandolini, that enables massive learning on complex business domains and promotes collaboration between different disciplines and across teams.

Alberto Brandolini is one of the most prominent advocates of Domain-Driven Design and an international speaker.

Come and learn with the master!

We’ll take into account the different perspectives (including the facilitator) in a process that spans large-scale discovery, to leverage collaborative design.

We’ll experience the how, and we’ll discuss the why.

Day 1 – EventStorming as a discovery tool

Why do I care?

In November 2018, EventStorming entered the Adopt circle in the Techniques quadrant of Thoughtworks technology radar.

In just a few years, EventStorming has become the de-facto standard, in the Domain-Driven Design community and beyond, to analyze complex domain, clarify domain boundaries, help identify your core domain, prioritize work, and move towards a microservices architecture.

Whether you are a software architect, a developer, a business analyst, a domain expert, a product owner, a UX designer, a tester, or any other role in your organization, you can leverage this simple but powerful tool to obtain better visibility and clarity about your domain.

In a few hours of workshop, you can tackle complexity and move from exploration to implementation, transcending communication silos in your organization.

EventStorming is interdisciplinary. The specialistic notation is dropped in favor of an incremental lo-fi approach that allows an inclusive approach while driving the exploration towards the most sensitive areas.

Every participant will actively contribute. Everyone is welcome.

A word from Agile Partner's CTO

I met Alberto at the Build Stuff conference back in 2013. While attending his talk on Domain-Driven Design (DDD) and EventStorming, I resonated so much with everything he was saying that I spent half of the session nodding. So, at the end I had to go talk to him.

Since then, we have met on many occasions, mostly at DDD conferences around Europe, but also at the first #play14 event I organized in Luxembourg. In 2018, he invited me to join the first EventStorming Summit in Bologna, where we met with 20 of the most skilled EventStorming practitioners. It is during that same event that I have decided to build more awareness about EventStorming in Luxembourg and the greater region. Hence this master class.

EventStorming is a great tool to explore complex domains and put things quickly in motion, from big picture to software design. The format is easy to understand, and provided you have the right amount of stickies and markers, you can jump into an EventStorming session very easily.

Alberto is a witful, passionate and extremely creative professional, who has tremendous technical knowledge associated with excellent facilitation skills. The amount of energy that he deploys shows how much he cares about what he does and how committed he is to helping solve his customer’s problems.

EventStorming is his "baby" and there is no better person in the world to learn from about this great technique.

Days left before the event

EventStorming Creator, author of Introducing EventStorming - An act of deliberate collective learning and Founder of Avanscoperta, Alberto Brandolini is a 360° consultant in the Information Technology field.

Asserting that problems cannot be solved with the same mindset that originated them, Alberto switches perspective frequently assuming the architect, mentor, coach, manager or developer point of view. 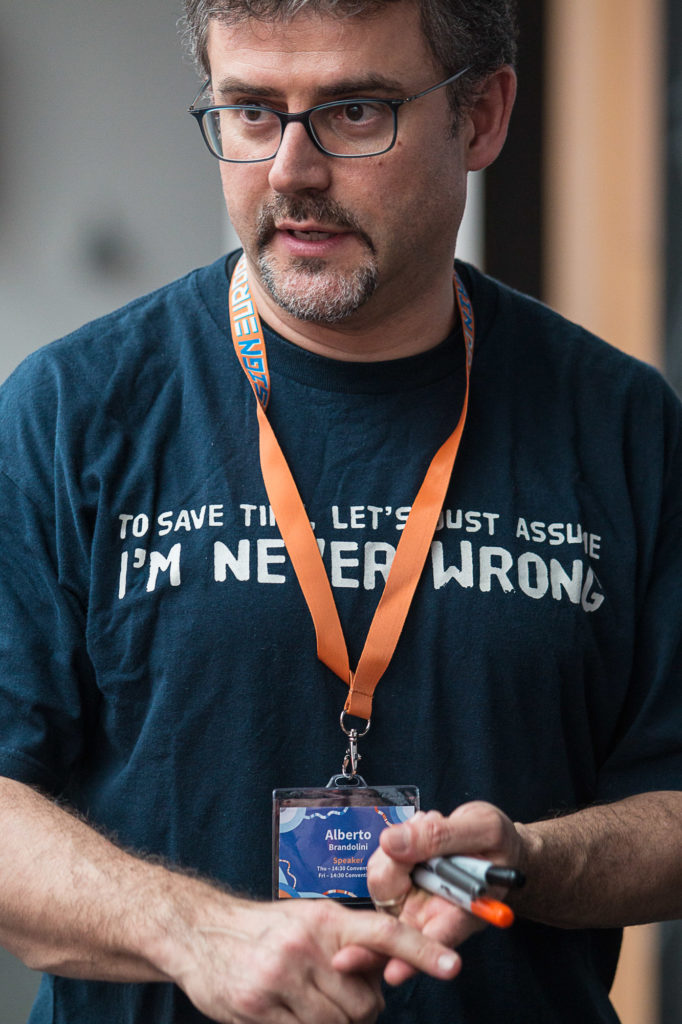